Why Is My Corn Still Yellow?

Frequently, Eastern North Carolina receives one or more thunderstorms that results in two or more inches of rainfall during the months of April and May. These rainfall events may leach some critical nutrients deep into the soil profile away from corn seedling roots or simply move nutrients from the field to the surrounding environment on eroding soil particles. To prevent such losses, farmers apply a small amount of the plants nutrients needed at planting and the remainder later in the year when the corn plant is more likely to more rapidly utilize these nutrients. However, even this management of nutrients sometimes fails.

Whether the soil type is sandy or organic, a lack of much slope results in ponding water and saturated soils. Thus, nitrogen, sulfur, potassium and magnesium may be lost from leaching. Too, and often more of a significant factor than leaching, nitrogen is rapidly depleted by denitrification. Compounding the problem, small seedlings cannot thrive in soils low or depleted in oxygen.

When this occurs, young corn plants can be pale green to yellow. Uneven growth may occur with some plants appearing normal but adjacent plants very small with yellow to pale green appearance. Often interveinal chlorosis occurs. Furthermore, as soils begin to drain, recovery may be extremely varied even within a row due to slight variations in soil type that impact soil drainage. Since corn yield is established early during the growth stage of corn, such stress on the plant is not desirable. 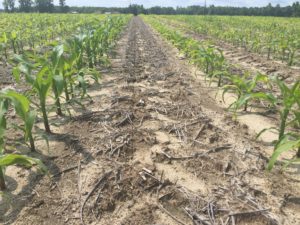 The best solution to correct the immediate nutrient problem is to follow recommendations of tissue test results. The North Carolina Department of Agriculture & Consumer Services offers such testing for a small fee. Sampling procedure may require an entire plant or simply the most mature leaf depending upon the size/stage of the corn. (Read more on how to take a sample and any associated fees.)

While this is the preferred method, some caution is advised. Root systems of small plants will not function or develop well in the low oxygen environment, especially if essential nutrients are low or lacking. Thus, tissue sample results taken before the plant begins to recover may show multiple nutrient deficiencies. It is possible that the soil may actually have ample nutrients available, but the plant simply is not taking up these nutrients. Thus, compare tissue sample results to previously taken soil samples. As example, if tissue samples reveal low potassium yet soil sample results reveal that potassium indexes are high to very high, then it is likely that ample potassium exists and no additional potassium is needed. In this case, simply wait for plants to recover as soils drain. In contrast, if both tissue and soil test results indicate low sulfur, then corrective measure should be taken to add additional sulfur. The point is, one tissue sample alone may not always provide complete information needed to make decisions. With the exception of nitrogen fertilization, use multiple tissue tests and/or soil test results for more accurate determination as to whether additional nutrients are needed.

Since NCDA & CS Agronomic Division soil tests do not routinely test soils for nitrogen, one can assume that after such rainfall events and saturated soils that at least half of the original amount of nitrogen is no longer available. Replacing half of the nitrogen along with sulfur. Sulfur also leaches easily and is critical for nitrogen uptake. Tissue sample results with a N:S ratio below 15:1 indicate low nitrogen uptake due to low sulfur. Liquid forms of nitrogen with sulfur have historically been adequate to correct low nitrogen and sulfur within corn plants as has dry material such as ammonium sulfate.

Typically, corn plants begin to improve within 5-7 days of a corrective nutrient replacement and when soils begin to drain. However, if growing conditions do not dramatically improve, examination of other potential problems are warranted. Other nutrient deficiencies such as copper or manganese may begin to become evident due to the extended plant stress. A low soil pH, even in small areas, may hinder plant recovery. Too, areas of soil compaction or poor drainage will be easily noted by poor color and/or uneven growth. Lastly, often a low population of harmful nematode that otherwise might not be noteworthy may become evident since the plants have already endured multiple stresses. Thus, while the lack of rapid plant recover is not desired, these areas of continued poor growth illuminate other areas of improvement needed.

In addition to this post, Dr. Ron Heiniger, NCSU Crop Science, has provided a publication dealing specifically with management of corn after heavy rainfall as well as flooded fields. Download this publication at the link below.

For more information, contact the author by email at: mike_carroll@ncsu.edu