Why We Can’t Practice No-Till Forever

Find this article at:
go.ncsu.edu/readext?876777
— Written By Mike Carroll

Utilizing minimum or no tillage as a farming production system is often presented as the solution for reducing fuel usage to produce food as well as increasing soil organic matter/carbon. Both of these benefits are lofty goals but the reality is that neither fits all soils and all crop production. The assumption that farming practices and soils are similar worldwide is false. Too, all soils are not suitable for no-till or minimum tillage. Anyone stating differently is simply wrong. Here’s why. 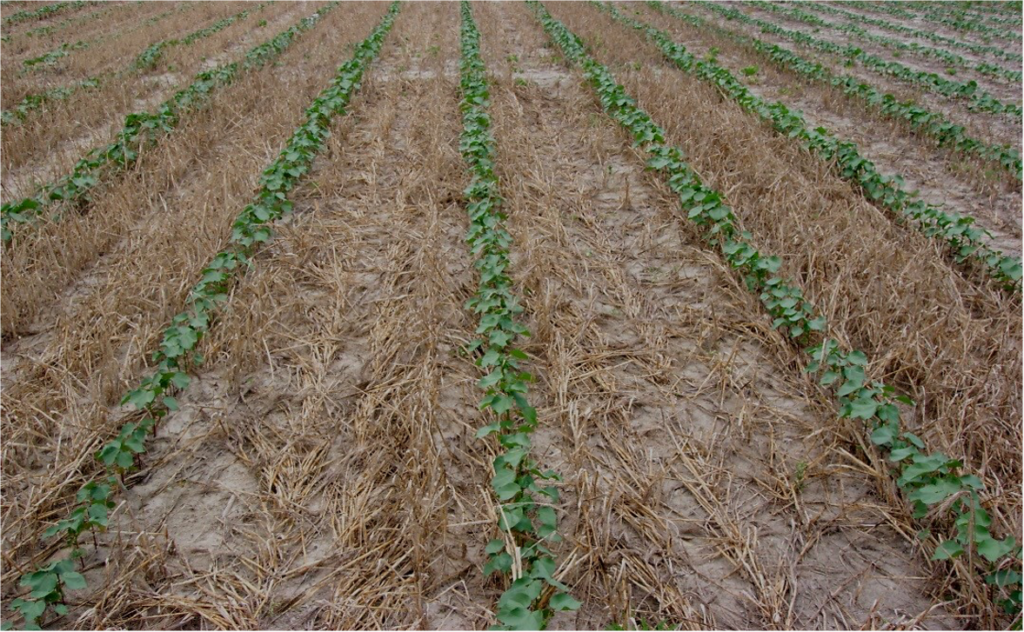 First, within Eastern North Carolina (NC), much of the soils are dominantly sandy soils. These soils are a mix of coarse and fine sands. Over time, the finer sand particles move deeper into the soil profile leaving the coarse grains of sand on the surface. The translocated fine grains of sand will form hard, cement-like layers due to continued wetting and drying sequence as well as from compaction from farm equipment. Even the areas of soil with high organic matter on the surface often have these fine sandy layers of soil deep within the profile. (Having thusly stated, we do indeed have large areas of soils with deep organic layers and peat profiles. This will be discussed later).

Typically, promotion of soil surface residue to provide greater rainfall infiltration is promoted as one of the benefits of no-till practices. Furthermore, as micro and macro-organisms feed on this soil residue, it becomes increasing organic matter that translocates deeper into the soil profile and thus adds multiple benefits. Leaving soil residue from previous crops or cover crops within Eastern NC does indeed help with water infiltration. However, many of the other assumptions are not valid.

First, the climate within Eastern NC is typically warm with the exception of late January through about late February. As such, soil organisms do not cease activity. Degradation of soil residues continues most of the year. In contrast, in other parts of the US, biological activity ceases due to cold or freezing soils. This freezing stops biological processes allowing organic matter accumulation over time.

Another factor that influences organic residue accumulation is simply that we have unreliable production due to rainfed conditions that may greatly limit crop production. Thus, crop residue biomass varies greatly. Even when climatic conditions favor excellent crop growth, tropical systems may destroy the crop, leaving only minimum crop residue.

In a typical no-till production system, these factors would not limit organic matter accumulation. However, for us, it does. As such, it is virtually impossible for us to accumulate carbon within our soils long enough to contribute to much, if any, change in soil organic matter accumulation. Yes, we can indeed build crop residue. However, data shows that even long-term no-till production does not increase soil organic matter or reduce hard pans deep within the soil profile. Simply put, the organic residues aids in surface runoff and water impermeability, but only to a slight extent.

As mentioned earlier, fine sands contribute to develop of root restricting hard pans in the soil. These hard pans not only limit root growth, they limit water holding capacity of the soils. Thus, yield is reduced. No-till production can occurs successfully but over time, these hard pans still develop. A deep tillage is required to correct the problem. There is no other means proven to be successful.

Another significant factor of crop production relies upon the ability to add nutrients to the soil in adequate amounts to produce the crop. Conventional tillage incorporates these nutrients throughout the soil profile  Therefore, the upper soil profile that contains numerous roots has adequate nutrients and the proper soil pH. In contrast, no-till production does not allow tillage incorporation into the soil. Thus, nutrients must move from the soil surface into the soil profile over time. As such, it is common to have a stratified concentration of nutrients in layers within the soil profile. As example, the upper few inches may indeed have the proper soil pH due to recommended lime applications but the soil below this layer may have a pH too low for proper root growth. Similarly, phosphorous does not move extensively through the soil as other nutrient might. Thus, phosphorous may be adequate for crop growth within the top inches of the soil but not adequate within the deeper soil zones where root growth and nutrient uptake occurs.

Micronutrients can become an issue with limited no-till production. Nutrients such as copper, zinc, boron, and manganese are needed, but in minute amounts. Ideally, for long-term correction, 3-10 lbs./ac, depending upon the micronutrient and soil type,  of these nutrients would be applied and incorporated for even distribution within the soil. This is not possible under a true no-till system. It is also not feasible for continued foliar application to correct for deficiencies. As such, in many cases, should a micronutrient deficiency continue, the best solution is to broadcast the recommended amount and incorporate into the soil 6-8 inches. Again, this violates the true no-till principle.

Another critical component of no-till is that one must avoid equipment travel on the field when soils are wet. With frequent rainfall within Eastern NC, inevitable a critical pest management application or harvest will need to be made when soils are not ideally suited for travel. This is especially true following hurricanes when salvage of crops are necessary. Such equipment travel will create hard pans within the soil profile. Too, if too wet, ruts from the wheel are created making future planting and travel impossible. This can be corrected with tillage, but this violates the “no-till” practice.

Earlier within the article, soils with high organic matter content was mentioned. In contrast to the sandier soils, these are often peat or peat-like soils with poor drainage. No-till is a common practice for these soils but they too have the same fate as sandier soils regarding nutrient or soil pH stratification and development of ruts. Some of these soils if above a sandy soil layer also exhibits soil compaction. However, these organic soils also have an additional issue. Crop residue on the surface increases but decomposition is slow. As such, crop residue builds on the surface of the peat making it difficult to plant directly into the soil. Simply put, these once hydric soils, now drained, do not decompose crop residue quickly because of poor drainage and limited microorganism activity. Thus, it some cases, the crop residue becomes a hindrance to planting and equipment travel rather than an aid. Disking the crop residue into the soils will encourage more rapid crop residue decomposition.

Lastly, some crops simply need tillage. Within this area crops such as sweet potatoes, peanuts, and tobacco require excellent drainage, transplanting and/or digging. Again, this violates the no-till principle. However, crop rotation is a vital cultural production tool that increases yield and eliminates pest management problems.

These are simply a few examples showing that while no-till is valid tillage practice within Eastern NC, it has limitations.