How to Deal With Corn and Changing Weather Patterns

Find this article at:
go.ncsu.edu/readext?855452
— Written By Mike Carroll

Examining the data from NOAA, notice that just prior to 2000, March temperatures have been much warmer. Too, according to the NC Climate Service Report,  the frequency of rainfall events greater than 3.0 inches has increased. Lastly, annual precipitation has increased due to increasing frequency of rainfall events and/or greater number of tropical storm systems. All of these factors need to be considered when selecting a corn planting date since stress during reproduction stages can be the most detrimental to yield. 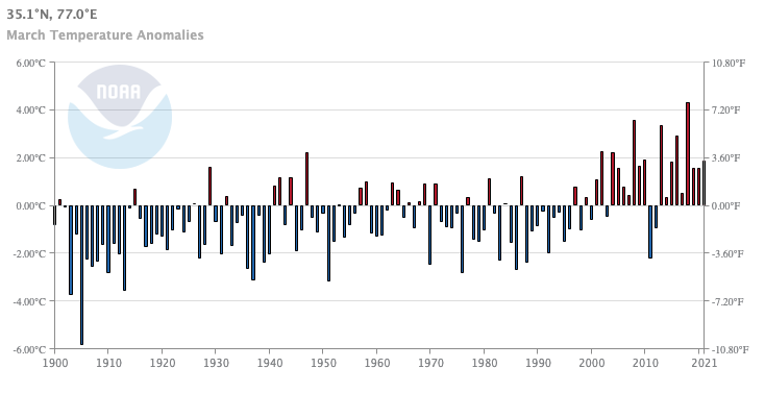 Ideally, corn should be planted when the three to four day forecast predicts accumulation of 100-125 Growing Degree Days (GDD). Once emerged it typically takes 1200-1600 GDD, depending upon the hybrid maturity, to reach reproductive stage. Assuming the midrange of 1400, one can examine the probability of adverse events at the time of early reproductive stages. Note that historical data for this area shows low probability of rainfall from about June 1st through June 30th  when corn is likely to begin reproductive stages. So, the best one can do is aim to avoid beginning of tassel during the lowest probability of rainfall. One way to do so is to match the maturity date for corn to an appropriate planting date.

To look a bit more closely at the predictions of this tool, examine yield and weather patterns over the past few years. In 2020 and 2021, corn yield was excellent. In fact, 2021 set new corn yield records in NC. Note that in these years, frequent rainfall events occurred May through about June 20th, then frequency of rainfall decreased until about July 4th. So, while corn did indeed experience some heat/drought stress, it was after silk and tassel stages were completed. In contrast, data for 2016 & 2018 show similar result with ample rainfall in May but a lack of rainfall from early through mid-June when these reproductive stages occurred. The primary point is that while we do not have the ability to accurately precisely predict rainfall events in the future, we do have tools that predict the highest possibility of occurrence. Use these tools to increase odds of success!

Rainfall for May-July for 2018  Source:  Weatherspark.com

Another feature of this tool is that the GDD accumulation rate is also provided. While rainfall patterns or indeed critical, so are night temperatures. As such, one can compare historical GDS accumulation to the current trends. As stated earlier,  no prediction tool can ensure success all the time. However, using this tool and pairing early reproductive stages to coincide with the least probability of adverse conditions will increase chances of success.