Find this article at:
go.ncsu.edu/readext?760988
— Written By Thomas Glasgow (4 weeks ago) and last updated by Jami Hooper
While walking along a trail in the Cherokee National Forest in August of this year, I noticed a yellow-flowering “vine” that resembled Carolina jessamine (Gelsemium sempervirens). It wasn’t a perfect fit, however; for one thing, its flowering was way off schedule, even considering the elevation (Carolina jessamine begins flowering in February in Eastern North Carolina). Sometime later I submitted images to the herbarium at East Tennessee State University, which is located about 10 miles away from the site in question. In doing so, I learned a new plant: Aureolaria laevigata, in the Orobanchaceae or broomrape family.
Most of the genera contained in this particular family are either fully or partly parasitic on the roots of other plants. A. laevigata is semi-parasitic on the roots of oaks, hence the common name “Appalachian oak-leach.”  What I mistook for vine growth was instead a just sprawling, semi-erect growth habit.

The images below provide comparisons between Aureolaria laevigata and Gelsemium sempervirens. A. laevigata is widespread across North Carolina, but more common in the mountains and piedmont portions of the state. 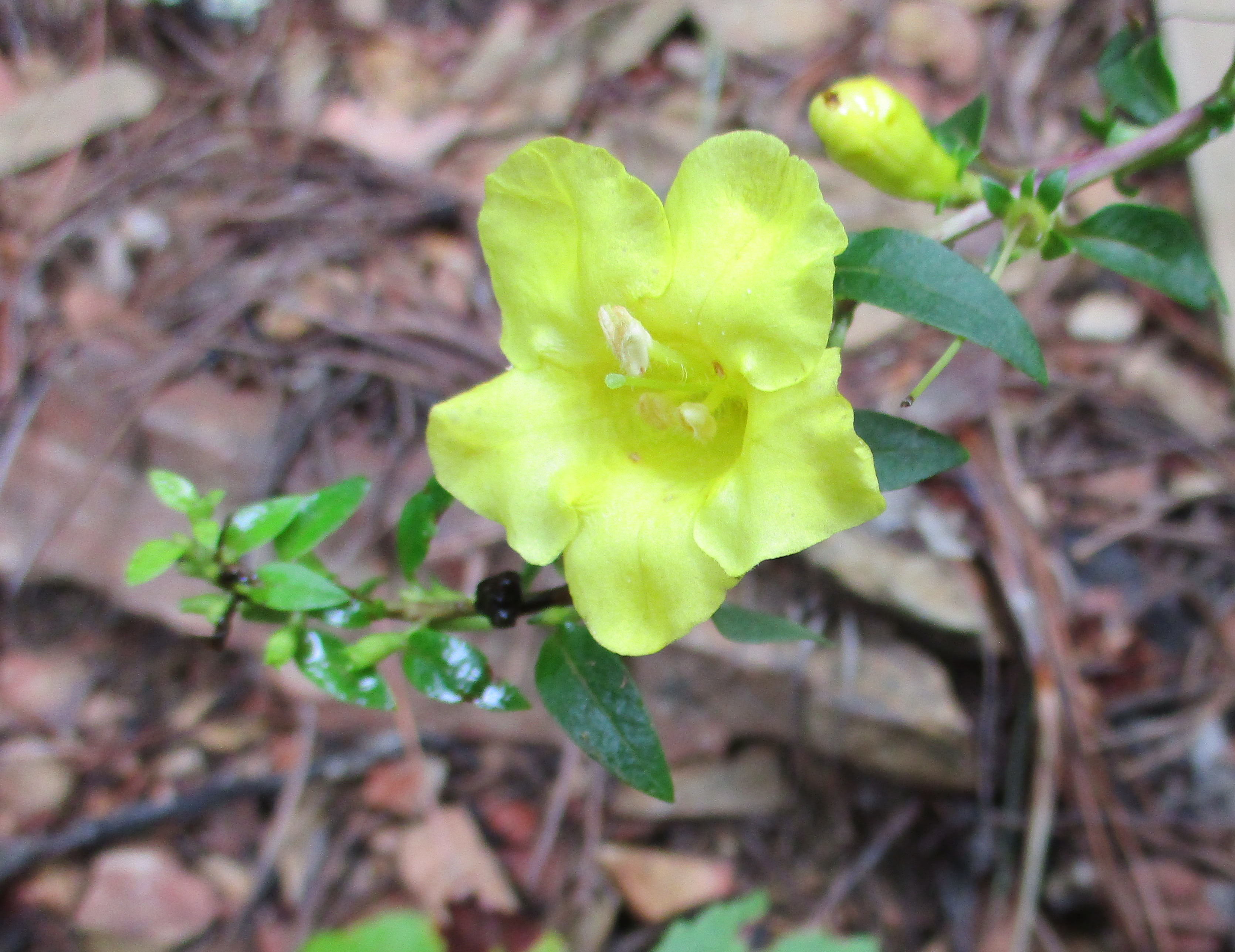 Aureolaria laevigata, Unicoi County, Tn, August 2020. The pistil is surrounded by four stamens, all maintaining some “social distance” space in between. Also note the bilateral structure of the corolla, similar to a snapdragon flower. (Snapdragons are in the Scrophulariaceae, which is the former home of Aureolaria.) The flower can also be described as zygomorphic, or irregular and not symmetrical. Aureolaria flowers are generally 2-lipped, with the upper lip 2-lobed, and the lower lip or portion 3-lobed. 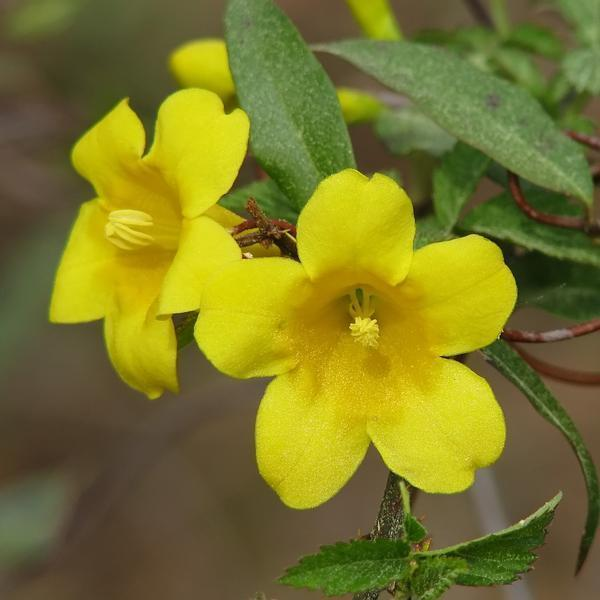 Gelsemium sempervirens, image by Vickis Nature CC BY-NC-ND 2.0
These flowers are symmetrical (actinomorphic), with five stamens, and the anthers of the stamens folding together. Flowering time is late winter or early spring. 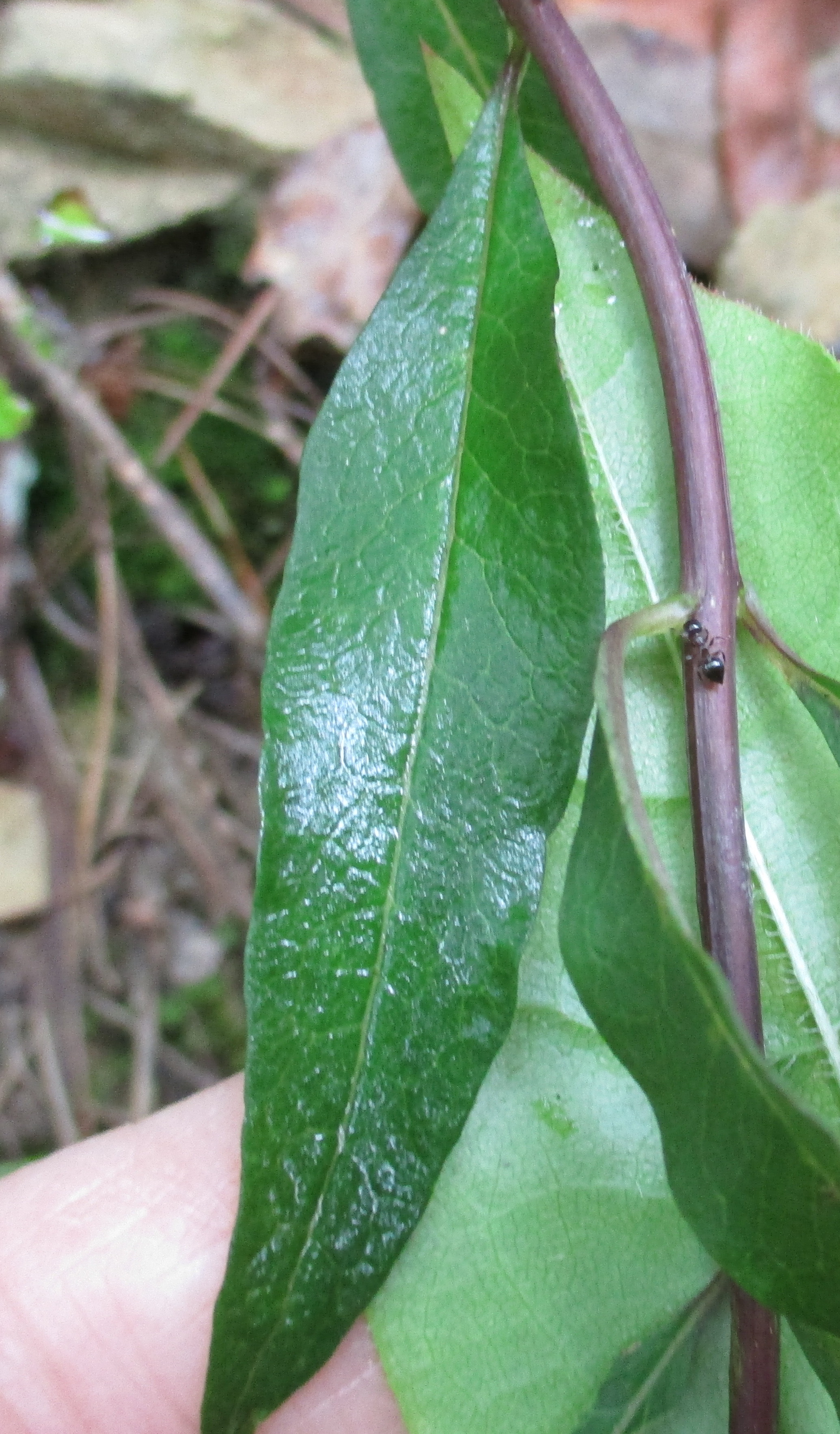 Aureolaria laevigata, Unicoi County, Tn., August 2020.
The leaf does resemble that of Gelsemium, but the stem of Aureolaria is squared, as compared with the rounded stem of Gelsemium. (The larger leaf behind the stem is an unrelated plant and was there to help with camera focus.)