Find this article at:
go.ncsu.edu/readext?632051
— Written By Mike Carroll

Each year N.C. Cooperative Extension agents across Eastern North Carolina provide corn varietal performance trials. Varieties evaluated in 2019 are shown in the image below. Many factors should be evaluated when choosing a corn variety, including 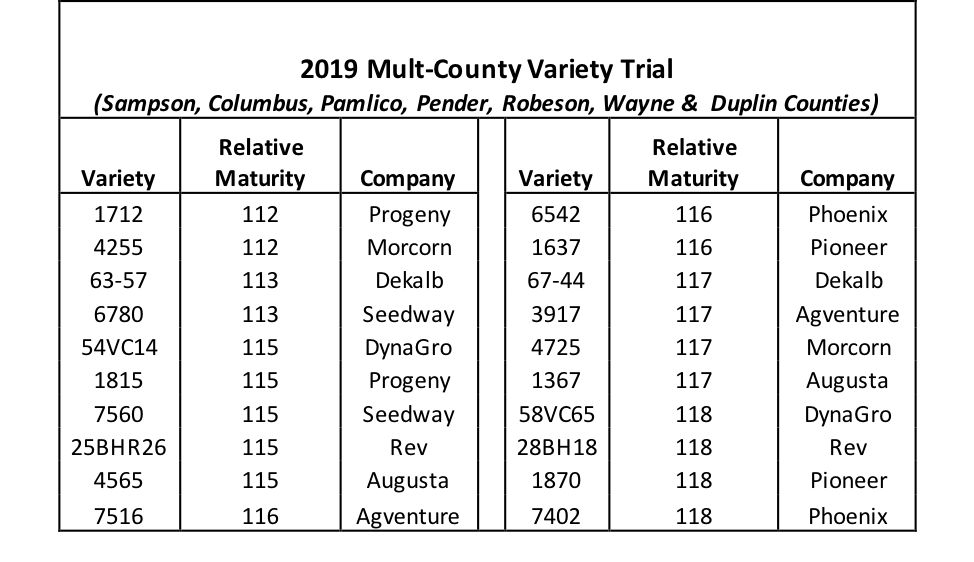 examination of the NC State Official Variety Testing results. Data in this post is simply provided as aid in selection that will perhaps afford a slightly better choice. Keep in mind that weather conditions varied across the state with some areas having ample rainfall and others experiencing excessive heat and drought. Too, coastal counties experienced Hurricane Dorian just prior to harvest. As such, limited separation in yield was evaluated in some of these sites. So, when efforts to differentiate varietal performance don’t provide a real difference among top varieties, other evaluation methods may prove helpful.

Begin with examination of the graph below of the yield results from the Sandhill Region of North Carolina (three sites). Yield in this area was slightly above average  compared to many other areas within the state due to slightly greater rainfall. The red line indicates average yield of 194 bu/ac. While numerically different, the top 14 yielding varieties are not statistically different. Thus, the science states that all are equal. It is tempting to  select numerically top yielding variety as a choice for the following season based on this type of data. However, one must recall that the statistical measures used for evaluation state that all of the top 14 yielding varieties have equal chance of yield performance. So, to better evaluate a variety’s performance, more test would be helpful. 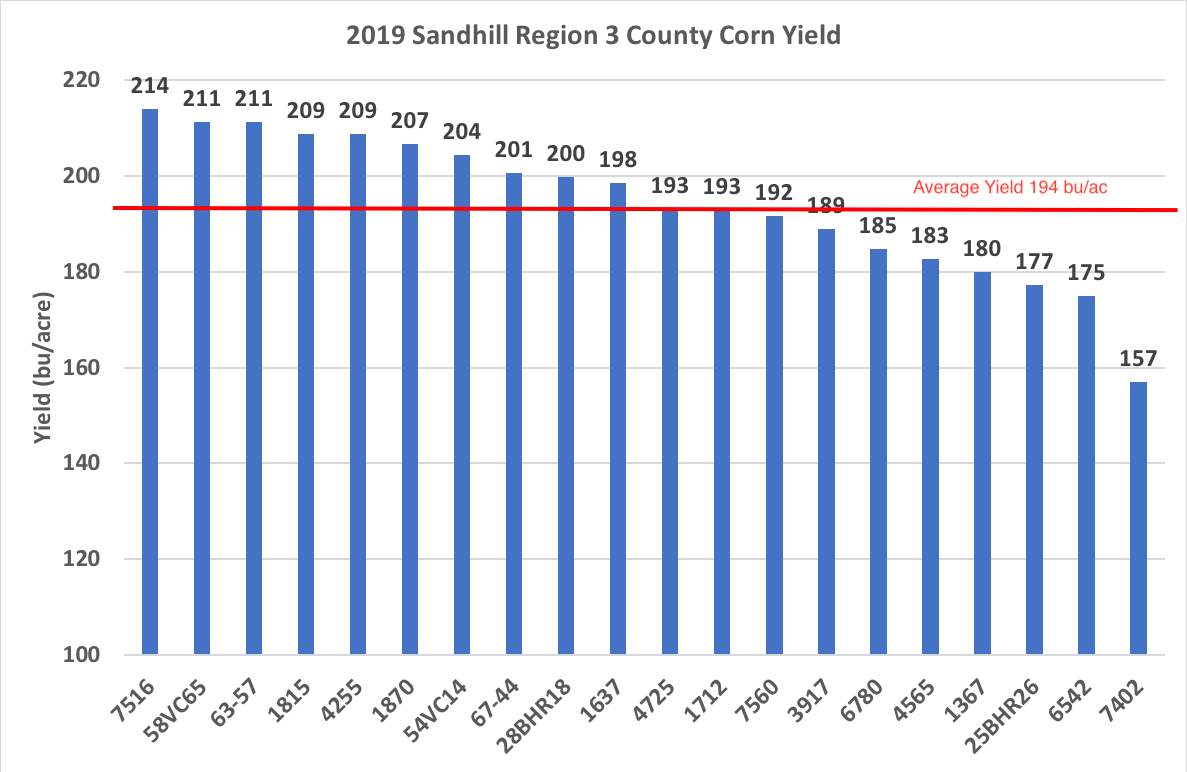 The graph below shows the same varietal yield results with four additional sites. Numerical yield ranges from 153 bu/ac to 191 bu/ac. Statistical analysis shows only a separation between the top 12 (top 12 all statistically the same) and the last 8 varieties. In this case, adding more sites did not improve chance of making a wise selection. 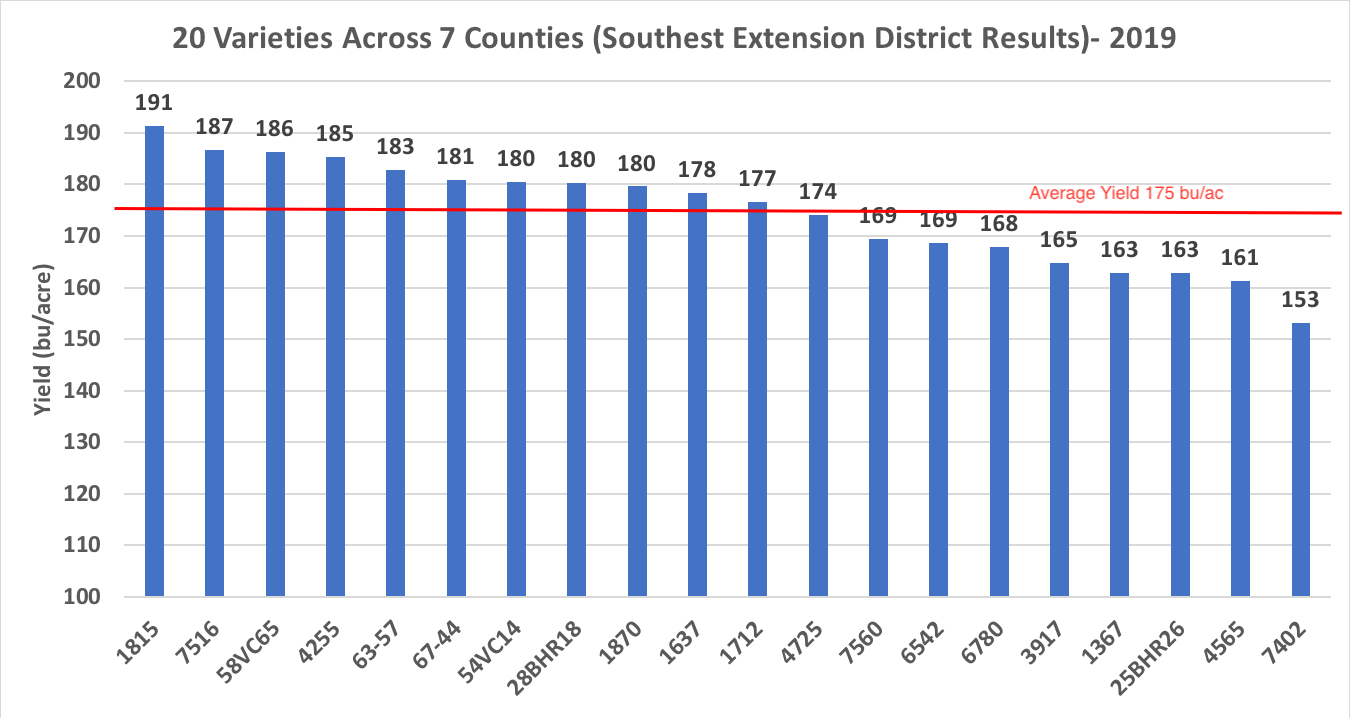 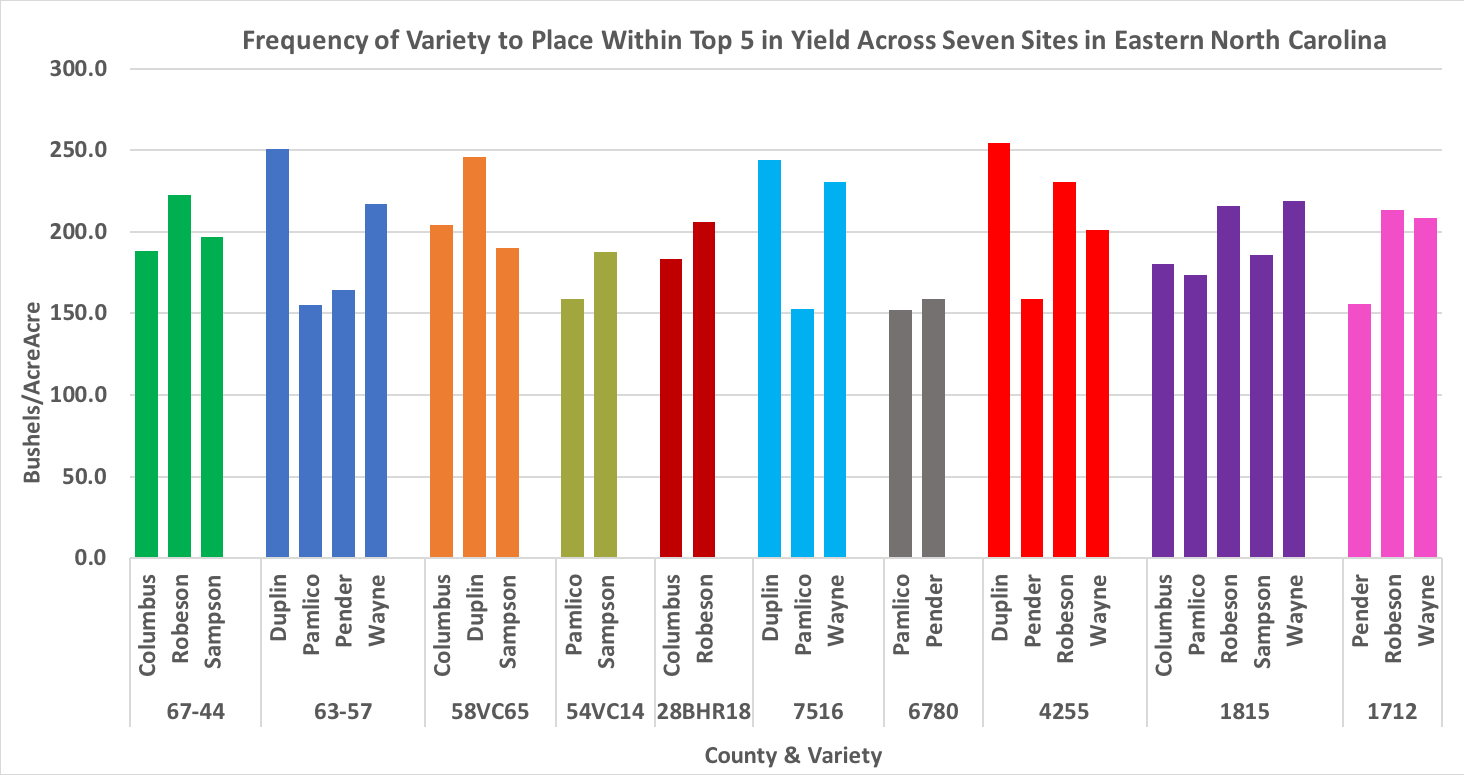 Based on this information, a reasonable assumption is that 63-57, 1815, 67-44 or 4255 would be logical choices. The varieties 58VC65 and 54VC14 appear to be good choices too. However, further evaluation reveals greater separation. First, consider the average yield of the varieties that were in the top 3 yielding varieties 29% of the time or greater as shown in the graph below. While 1815 and 63-57 did indeed rank in the top yielding varieties 57% of the time, these varieties averaged 195-197 bu/ac, respectively. In contrast, 7516, 4255, and 58VC65 have an average yield above the previously mentioned varieties but but were only in the top yielding group 29% of the time. Based on this data, any would be good choices. However, if greater variance in yield environment and growing conditions might exists, those that were in the top 20% more frequently might be a better choice. In contrast, if yield environment is high (highly productive soils, irrigation, etc.),  then a variety with a higher yield might be a better choice.

Thus far, evaluation has provided some varieties that tend to yield higher and are consistent over a variance of potential yield environments. To narrow the choices from this point, greater information regarding individual production is needed. As example, within this data, sites such as Columbus, Robeson, Sampson and parts of Wayne counties tend to have more sandy soils. As such, varieties that performed well in these counties are more likely to perform well on sandier soils or lower yield environments where corn might be stressed periodically. In contrast, Pamlico, Pender and Duplin counties tend to have slightly better soils, some organic. Thus varieties that performed well in these counties are likely to perform well in high yielding environments. Selection should also include relative maturity, potential planting date and seedling vigor of each variety. Other factors such as technology traits, grain quality, ear flex or other features should also be considered.

Hopefully, these comments have provided some additional means to evaluate varietal performance to better choose ones that fit individual production needs. Simply selecting from the “top” performance will usually provide a good choice of varieties, but just a little bit of extra effort examining the data a bit further will provide even better choices.