Most soils were saturated in early April preventing fieldwork. Less than 5% of corn was planted by the end of the first week in April. By mid-April, conditions were somewhat better but only the better-drained soils were appropriate for planting. Frequent rainfall continues to delay corn planting. Thus, as of today’s post, there are still an estimated 15% of fields to be planted to corn. 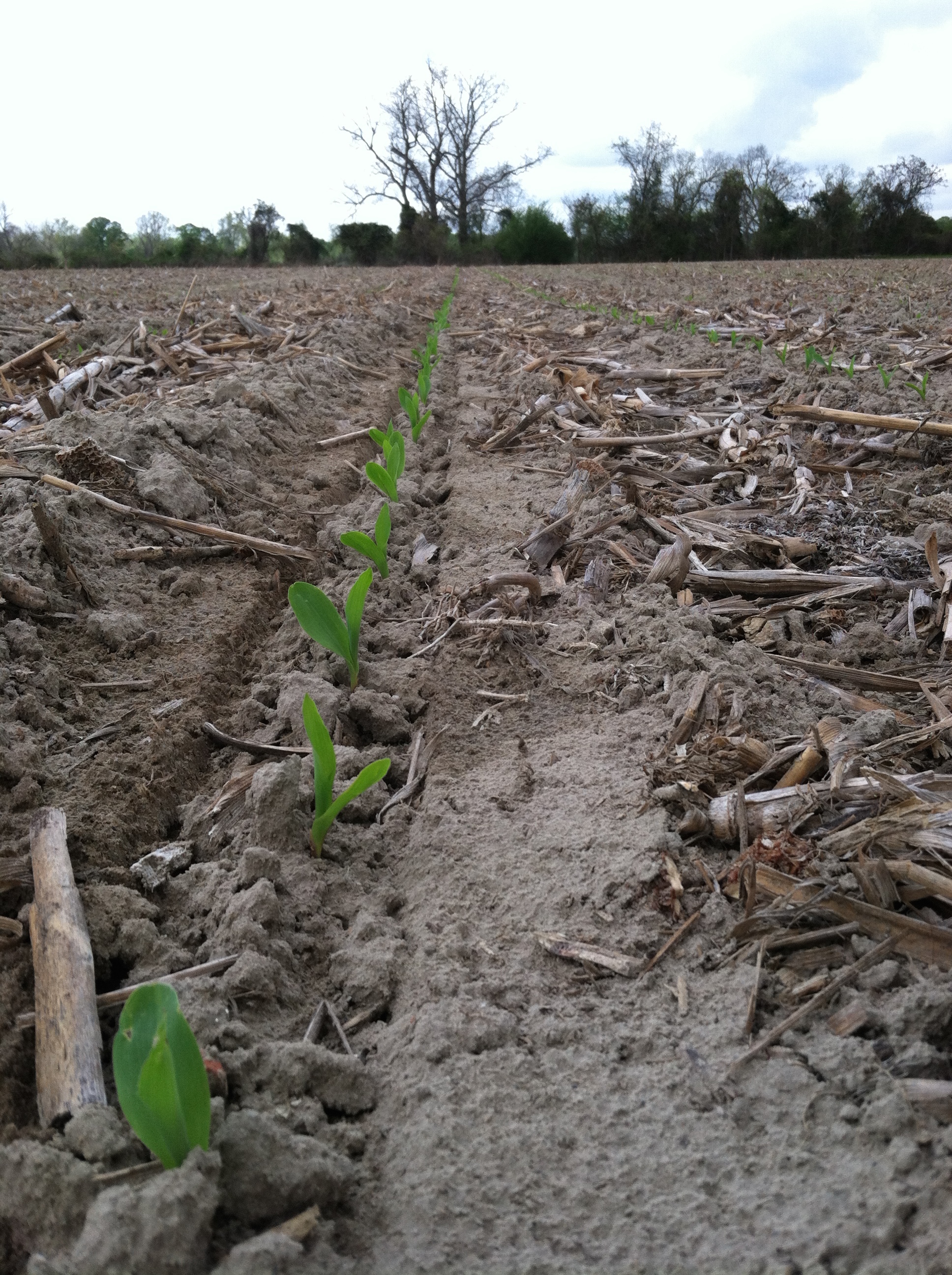 Corn that was planted within the past 10 days or longer has emerged quickly and uniformly. Early growth was rapid due to ample soil moisture and warm weather. Recently, much cooler weather has resulted in much slower growth. Thus, temporary phosphorous deficiency symptoms (purple leaf margins or leaf sheaths) are common. No corrective action is necessary if soil phosphorous levels are high or phosphorus was applied this season based upon soil test results. Typically, this situation is most likely the result of the plant’s inability to translocate phosphorous due to the cold, wet soils and cold temperature.

Typically, one plants corn early so that the tassel and silk stage occur at a time of a higher probability of rainfall. Within Craven County, this period of higher rainfall period normally occurs in early July. (July and August receive more rain than other months). Insect management is also a consideration for early planting but recent advances in seed treatments and technology have eliminated or greatly reduced the risk of insect damage to seedling corn. Thus, we now have the luxury to place a greater emphasis on matching the planting date and crop maturity to the timing of rainfall higher probability

According to a recent publication by Dr. Ron Heiniger, NCSU Crop Science, planting as late as May 15th may still produce high yields. In fact, over the past three years, growers planting between May 10th -15th within Craven County have been among the highest yielding corn producers. Generally speaking, the penalty for planting after May 15th is the loss of about 2 bu/ac per day. So, unless this date is greatly exceeded, we still have ample time to plant corn without great loss of potential yield. However, corn planted late should be managed slightly differently and may be at greater risks to disease threats or tropical systems. Read more at Planting Corn Late in 2015

POTENTIAL CAUSES OF YELLOW CORN: A few producers have noticed slightly pale green to yellow plants. Again, this may be related to environmental circumstances that will correct itself in time as soils begin to become less water saturated and warmer weather returns. However, it may also indicate low sulfur, nematode damage or a micronutrient deficiency. Most commonly, we find sulfur to be causing the problem when corn is planted in sandier soils and the grower elected to use a nitrogen source that did not contain sulfur. Nitrogen uptake depends upon sulfur. Since sandier soils do not have or retain much sulfur, sulfur must be added. Thus, if the nitrogen source does not contain sulfur, make sure to supply about 20 lbs./ac of actual sulfur in some other form to sandier soils. While sulfur deficiency is common, the presence of pale green to yellow corn does not rule out nematode damage or micronutrient deficiency. Both may cause slow growth, yellow to pale green plants or interveinal chlorosis. Complicating the matter, sulfur deficiency, copper deficiency, manganese deficiency and nematode damage may all create leaves with interveinal chlorosis. Often the only means of a precise diagnosis is to examine an existing soil sample, nematode assay or current tissue sample analysis from the NCDA & CS Agronomic Division. (Visit http://www.ncagr.gov/agronomi/ for information regarding fees, process, forms and other information pertaining to these tests). Email me at: mike_carroll@ncsu.edu Follow me on Twitter at: https://twitter.com/mcarroll_craven