Craven County Center will be closed tomorrow, Mon 01/18/2021 for the holiday.

Find this article at:
go.ncsu.edu/readext?642996
— Written By Mike Carroll

Within Craven and Carteret counties, the past five years of low commodity prices and frequent damage or complete destruction of crops by tropical storm systems has placed many agricultural producers at economic risk in 2020. Typically, when no significant increase in prices is projected, agricultural producers find a way to shave production cost to provide a minimum profit or at least break-even. Regrettably, this will be more difficult to do in 2020 since most have already reduced inputs to the minimum requirements. Too, when disasters occur, typically the following years provide income high enough to repay debts. For agricultural producers in this area, the frequency of storms systems impacting production has not allowed a subsequent year with high enough profit to recover.

Enterprise budgets developed by NC State University Agricultural & Resource Economics Department were modified to project return of investment for corn, soybean, cotton, peanut and tobacco crops. Production cost includes all inputs, an estimated $70/acre rent, crop insurance, and scouting. (The enterprise budgets used for each crop can be downloaded for viewing at the end of this article.)  Total production cost is down for some crops yet slightly higher for others.

Estimated Total Production Cost of Commodities on Per Acre Basis

Based on average yield and current prices, three crops, corn, peanut and tobacco show the most promise of a positive return of investment within a reasonably expected yield and current price. All other crops show a loss of income or a marginal return. Granted, the exact total for production cost and yield will vary. Thus, the charts below provide a variable return based upon these two factors given the stated production cost. 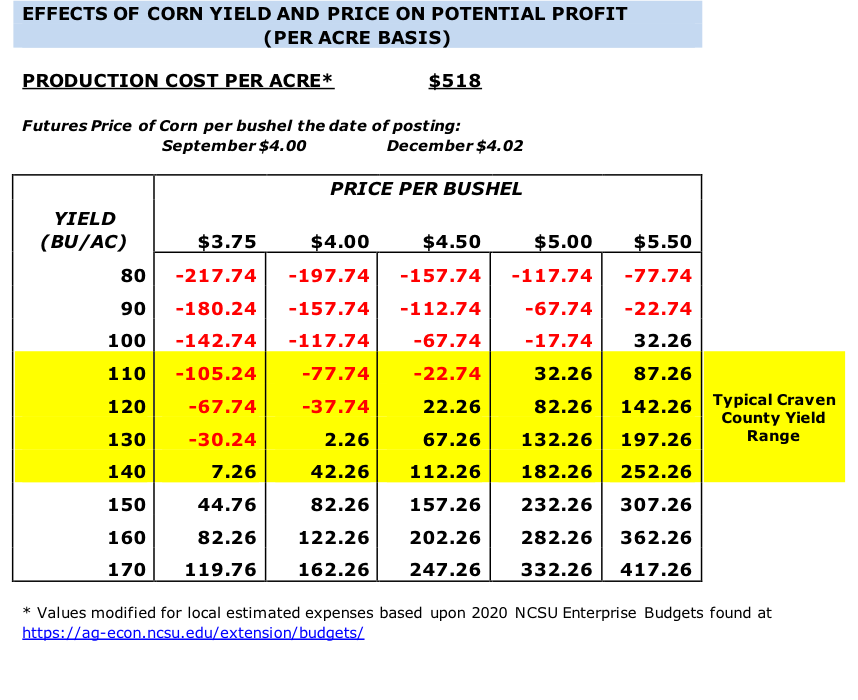 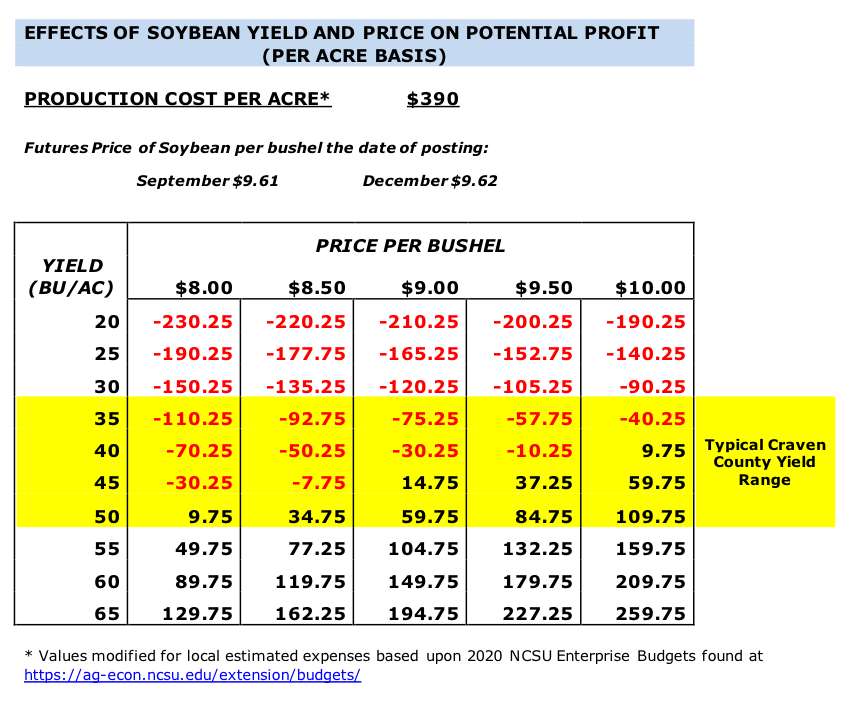 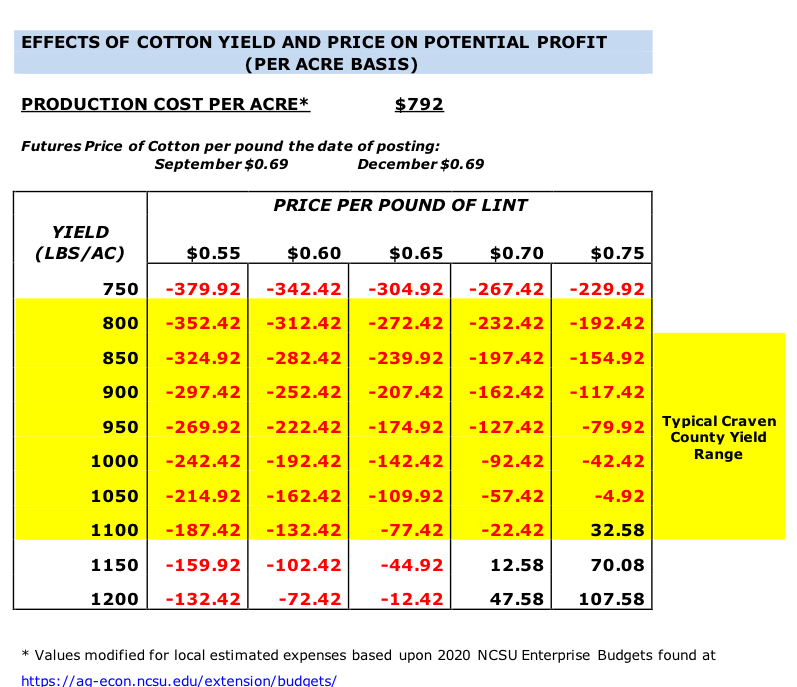 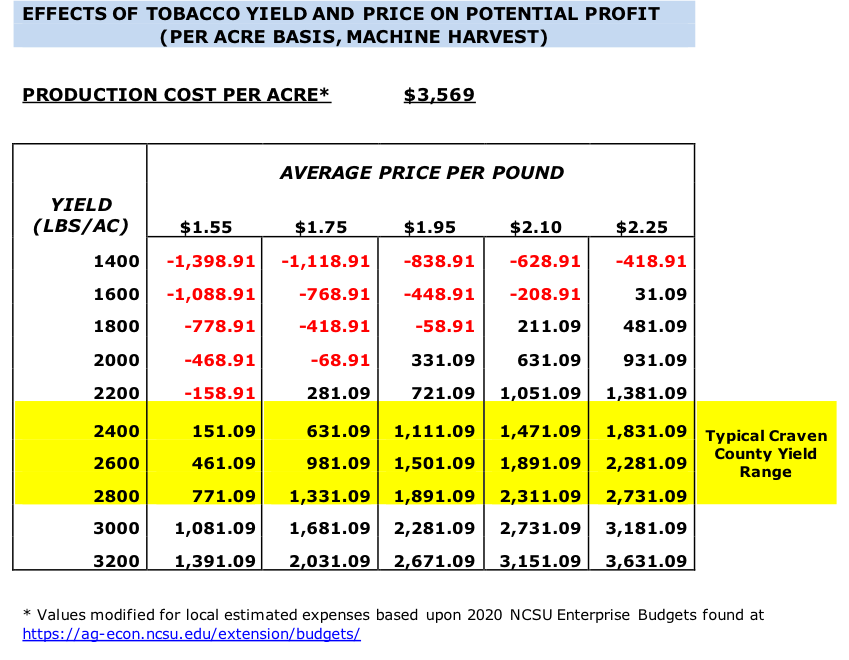 From a non-agricultural point of view, it would seem logical to plant only tobacco, peanut, and corn. However, both tobacco and peanut requires a contract for production and sales. Both of these commodities are declining due to foreign trade issues and increasing foreign production. In contrast, corn does not require a contract but is perhaps the riskiest crop for this area. Excessive heat or lack of rainfall can result in complete crop failure. As such, without irrigation, only about 25% of farmland is well suited for this crop. Given the assumed production cost of corn at $517/ac, 500 acres of production places over $258,000 at risk without any other crop than tobacco and peanut to repay debt loss to corn production. Crop insurance may pay half or slightly better of the variable inputs in the event of disaster, but such payments do not provide profit or return to the agricultural producer income.

Government payments provided through the existing Farm Bill as well as those resultant tariff disagreements, aid agricultural producers when commodity prices do not reflect positive income. As such, these payments are often relied upon by the agricultural producer to continue farming. These payments will vary greatly by crop, price, and county. Within the past year, Craven and Carteret payments averaged $57/ac and $46/ac, respectively.

N.C. Cooperative Extension works with agricultural producers to evaluate each commodity budget to ensure that only necessary inputs are utilized. Research-based information provides realistic yield expectations (RYE) for crops to avoid excessive fertilization and to protect the environment. Assistance in herbicide selection ensures least-cost selection of products yet prevents further establishment of herbicide-resistant weeds. New pests are identified and monitored. Together with partnering agencies and industry, these efforts support agriculture and agricultural communities.