Find this article at:
go.ncsu.edu/readext?510366
— Written By Thomas Glasgow and last updated by Jami Hooper

As of early February, there is a lot of visible damage to landscape plants in the Craven County area, and a lot of questions regarding the potential for recovery this spring and summer. Our best advice at this point is to wait and see. For many landscape plants, it could be late spring before we know how things are going to work out. For palms, it could take even longer.

This update will address the most commonly grown palms in Craven County, their expected low-temperature tolerances, and the level of damage we’re seeing as of early February. We’ll start with the most cold-hardy, and work our way down the list to the least cold-hardy. All photos were taken on January 31.

Needle palm (Rhapidophyllum hystrix) is a shrub-like palm with a rounded growth habit and no noticeable trunk. It is believed to be hardy to a temperature of -20° F. Needle palm has a sympodial growth form, meaning that it’s possible for a new side bud to form near the ground, producing a new plant. Needle palm is a SE U.S. native, but unfortunately is only occasionally seen in landscapes. Our single specimen at the Craven County Agricultural Building came through with no problems, as we’d expect. 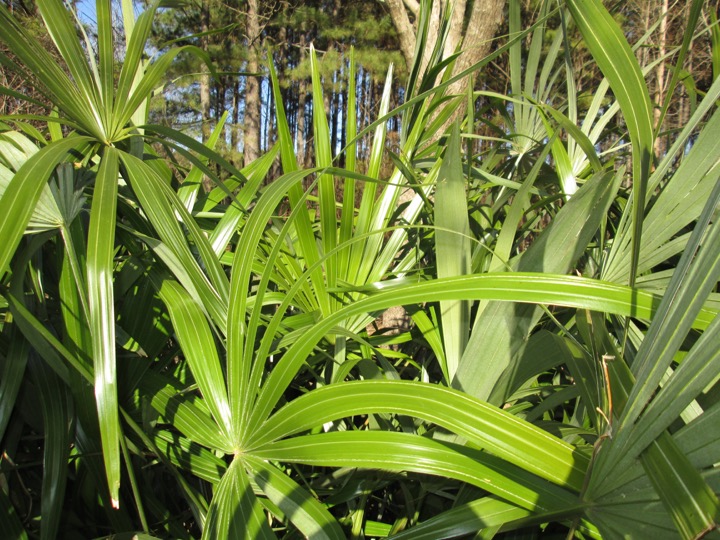 Our native blue palmetto (Sabal minor) is cited as being hardy to USDA climatic zone 6, which should take it to -5° F or thereabouts. I haven’t personally noted any damage to blue palmetto, as of early February. This palm also has a sympodial growth form. 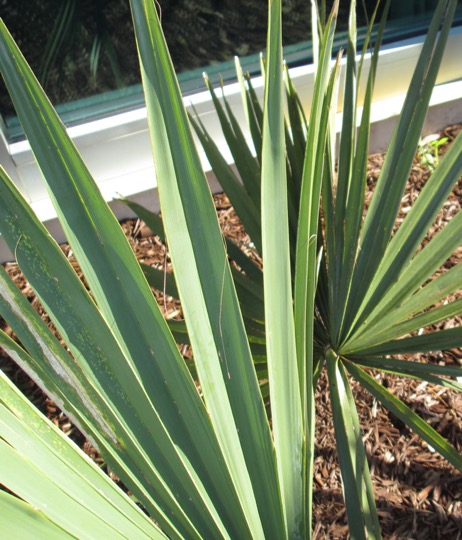 Blue palmetto; old insect damage can be seen to the left, but otherwise foliage looks great.

The ultimate cold tolerance of windmill palm (Trachycarpus fortunei) is a little tricky to pin down, and depends to some degree on who you consult with. Mississippi State University rates it as USDA zone 7, making it somewhat less cold hardy than blue palmetto. Initial observations around New Bern would seem to bear that out, but most of the damaged palms should survive and recover nicely. 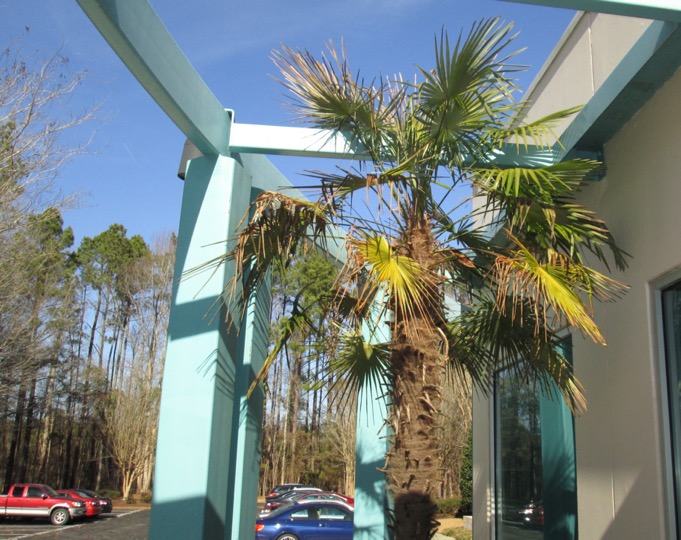 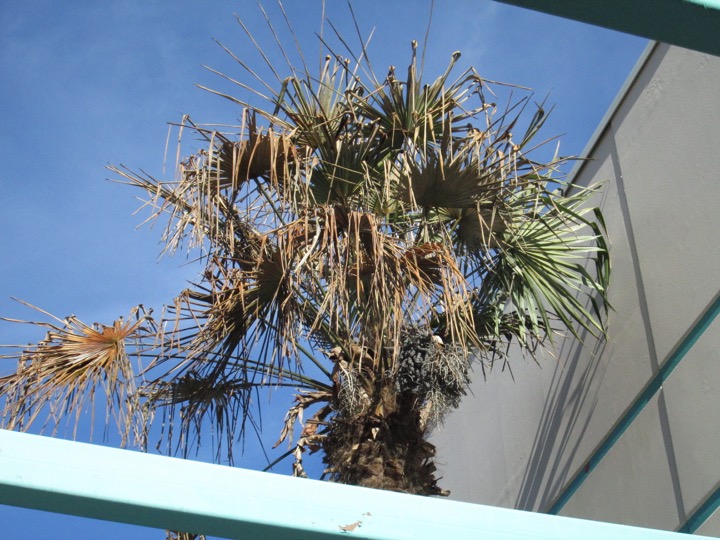 A taller windmill palm, less protected by the building.

The northern limit of the native range of cabbage palmetto (Sabal palmetto – the state tree of SC) is considered to be Bald Head Island, NC. However, over the past 20 years cabbage palmetto has been widely planted in home landscapes and public areas at least as far north as New Bern, and as far inland as Kinston. Some individual plantings in New Bern and Havelock have been around much longer. 2018 cold damage in the New Bern area seems to be erratic, varying primarily by microclimate. The single specimen growing at the Craven County Agricultural Building seems to have fairly significant cold damage to the fronds, but this does not mean a removal is imminent. We’ll have to wait until mid summer or even a bit later to know if the winter of 2018 proved to be too much for cabbage palms. It is rated as zone 8a winter hardy, which means that some damage is possible even in the 15°-20° range. 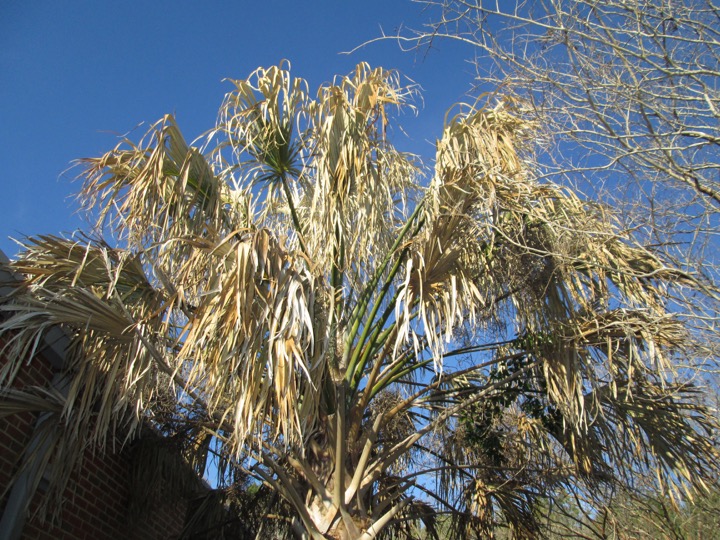 Cabbage palmetto at the Agriculture Building.

Pindo palm (Butia capitata) also has a zone 8a rating, but it is clearly less cold tolerant than cabbage palmetto. This palm is frequently damaged in Craven County winters, especially when individual plants are in sites exposed to open skies and sweeping winds. A group of a dozen or so pindo palms growing adjacent to Hwy. 258 between Jacksonville and Richlands was completely brown on January 31, whereas palms growing adjacent to a building in New Bern still had signs of green or blue-green color in the fronds and stalks. It should be noted that the average low temperature from January 1 through January 8 was slightly lower in Richlands than in New Bern, with two straight nights at 2°. (On February 1, pindo and cabbage palms along East Fort Macon Road just east of Atlantic Beach were looking much better; the lowest recorded temperature during the same time period was 14°.) 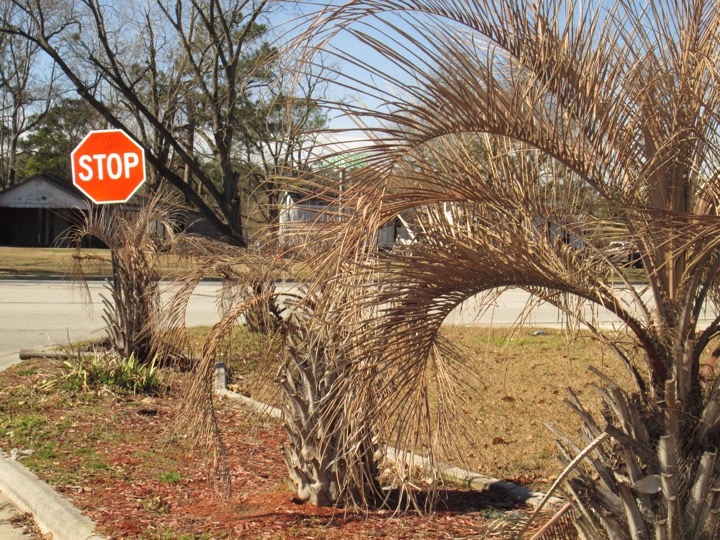 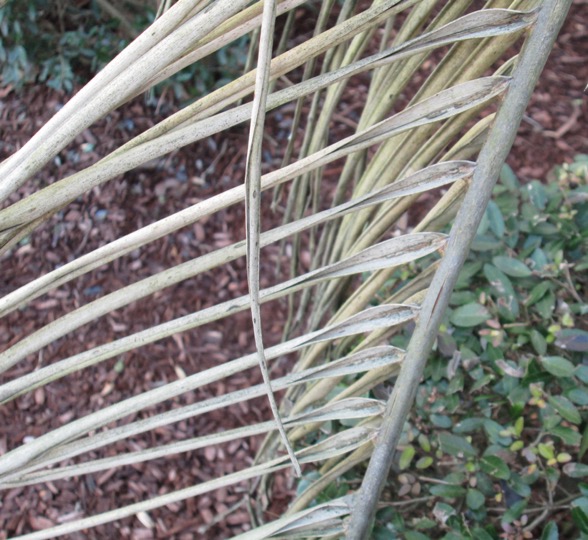 Pindo palm adjacent to a building in New Bern, NC. 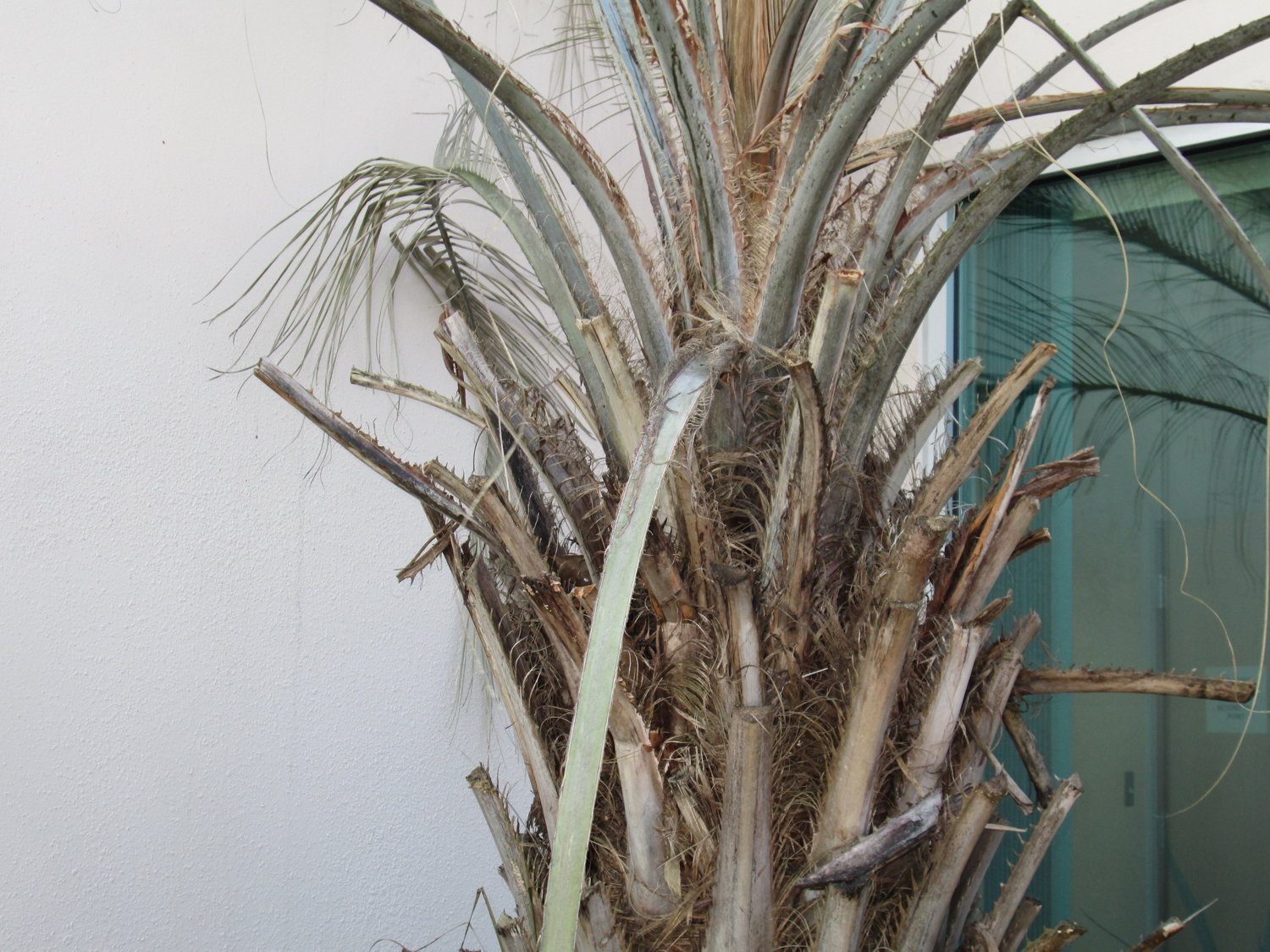 A second Pindo palm also adjacent to a building in New Bern, NC.

Finally, sago palm (Cycas revoluta; actually a cycad rather than a true palm) is considered hardy to Zone 8b, and is perhaps cold hardy down to about 19°. It is frequently discolored in Craven County winters but shows a good ability to recover. Sago palm is sympodial, so recovery could result from production of new buds. Most of the sago palms observed in Craven County appear to be completely brown following the early January weather, although if you examine the petioles (frond stalks) near the base you may spot some green coloration, which could be a good sign for recovery. Be careful in pulling away mulch or fallen leaves from the base of sago palms, as the petioles are very prickly. 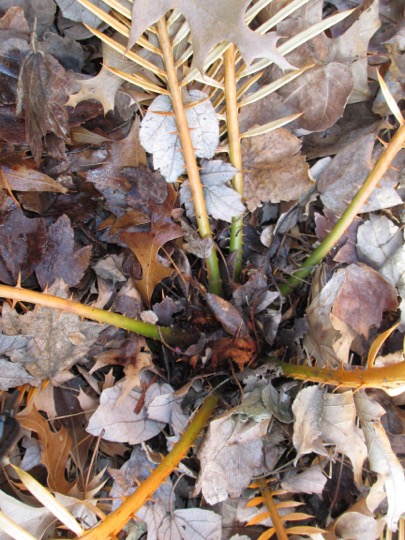 As noted above, the best advice for our palms at present is to wait and see. According to an information note from Mississippi State University Extension (Cold Injury to Palms, Publication 2828), palms grow slowly and commonly require 7 months to begin to re-leaf after cold injury. Certainly, we shouldn’t be making any final evaluations on our palms prior to early summer.